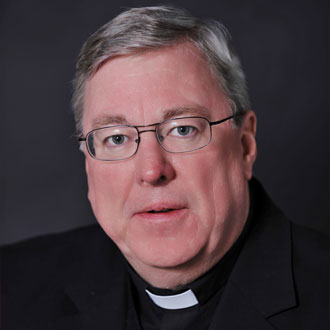 Rev. Monsignor Dr. Charles Kosanke was born and raised in northeast Detroit, the son of Charles and Catherine Kosanke. He is the oldest of six boys. He earned a Bachelor of Arts in Philosophy from Sacred Heart Seminary in 1981. He earned a Master of Divinity and a Master in Theological Studies from St. John Provincial Seminary in 1985. He earned a license (1990) and doctorate (1992) in Biblical Studies at the Pontifical Gregorian University in Rome.

Msgr. Chuck served for ten years (1992-2002) on the faculty and administration of Sacred Heart Major Seminary in the following capacities: Assistant Professor of Sacred Scripture, Director of Undergraduate Seminarians, Moderator of the Latin American Program, and Dean of Administration and Advancement. He also served as Rector of SS. Cyril and Methodius Seminary (The National Polish Seminary) in Orchard Lake, MI, for six years (2005-2011).

During his time at the Orchard Lake Schools, Msgr Chuck led the reaccreditation process for SS. Cyril and Methodius Seminary. He also assisted with restructuring the campus finances. He served two terms on the Board of Directors for the Association of Theological Schools, which accredits seminaries in North America for 8 years. He has chaired accreditation visits to almost 12 Catholic seminaries in the USA.

Msgr. Chuck’s parish assignments have included: Shrine of the Little Flower, St. Benedict, Church of Madonna, St. Cecilia, Guardian Angels, and St. Regis. He is currently the pastor of Most Holy Trinity, Corktown, and rector of the Basilica of Ste. Anne de Detroit.
Msgr Chuck was appointed by Archbishop Vigneron as the Moderator (Chief Pastor) of Southwest Detroit and Vicar, leading a team of priests overseeing 7 parishes and nine campuses. He was recently elected the Chairman of the Priests Council for the Archdiocese of Detroit.
Msgr. Chuck was named a Monsignor by Pope Benedict XVI in the spring of 2005. He has served on many non-profit boards and community organizations for over 30 years.

Are you a caregiver for someone with dementia, memory loss, or just caring for an aged loved one? Please join us for our final Adult Day Services Caregiver Support Group of the season on Wednesday, September 28 from 12 - 1 pm at our Adult Day Service Center on the campus of Sacred Heart Catholic Church in Auburn Hills. September 28 from 12-1pm in Auburn Hills - to register call 248-537-3300 ext. 3803 or cookek@ccsem.org ... See MoreSee Less

We are asking for sock donations now - Oct. 31st! If you are able, please consider donating new socks towards our “National Day of Service and Remembrance” Project. Socks collected will be distributed to veterans and their families and human service agencies throughout Wayne County. ... See MoreSee Less

Recall the last time you made a sacrifice in order to help someone who was in need of help. Reflect on all of the feelings you experienced. ... See MoreSee Less