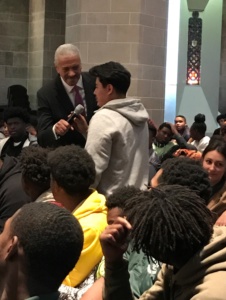 More than 600 students from Detroit Public Schools and other area schools attended a special event sponsored by Catholic Charities of Southeast Michigan, in cooperation with The Sports Marketing Agency and the NFL Alumni Detroit Chapter. The Sports Impact Luncheon, which took place Tuesday, Oct. 23 at the Cathedral of the Most Blessed Sacrament in Detroit, tackled the tough topic of drug addiction.

Proceeds from the event benefited Catholic Charities of Southeast Michigan’s Mental Health and Substance Abuse Counseling ministry, as well as other community organizations dedicated to serving those affected by the opioid addiction crisis: Grace Centers of Hope, Metro East Corporation in Detroit, and Team Cares Inc.

Catholic Charities would like to thank our event sponsors Alliance Catholic Credit Union, Blue Cross Blue Shield of Michigan, Children’s Hospital of Michigan Foundation, Oakland Regional Hospital, Walgreens, and Weingartz. We would also like to thank those who provided lunches for the students — Subway and Breakaway Deli. 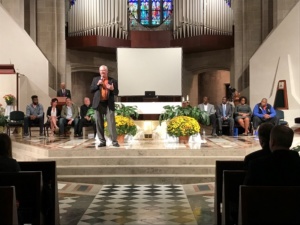