Ofrendas: Celebrating the Day of the Dead 2022 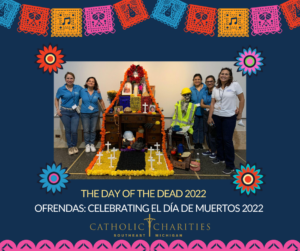 Congratulations to Catholic Charities of Southeast Michigan and La Casa Amiga Community Programs who were selected to exhibit for the annual Day of the Dead exhibition at the Detroit Institute of Arts (DIA)! 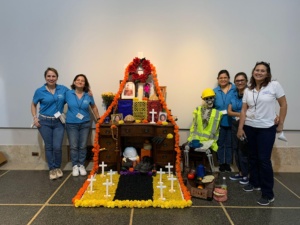 The La Casa Amiga Community Programs team poses for a picture after proudly building their Ofrenda display to honor those who lost their lives on the job.

In celebration of Dia de Muertos, the Detroit Institute of Arts, in partnership with Detroit’s Mexican Consulate, the Southwest Detroit Business Association, and Mexicantown CDC, invite you to explore a community exhibition of ofrenda altars. In Mexico, and other Latin American countries, the Day of the Dead is the time of the year to celebrate the lives of close relatives, friends, or community members who have passed away. Objects important to lost loved ones, such as favorites foods, drinks, mementos, and pictures, are collected and incorporated into elaborate displays that include pan de Muerto (bread of the dead), sugar skulls, candles, flowers, papel picado (paper cutouts) and other decorations.

About Dia de Muertos at the DIA

The DIA put out a call to artists for proposals for ofrendas. Submissions were judged by a committee of representatives from the DIA, the Consulate of Mexico in Detroit, and the
local community. Committee members were Georgina Garcia-Pffeufer, Jesús Gutiérrez Rodríguez, María Elena Rodríguez, Marlon Lara, Myrna Segura-Beltchenko, Nancy Barr,
Raymond Lozano, and Rufino B. Lim. The wide-ranging group of artists chosen for the exhibition includes seasoned artists, teachers, art enthusiasts, and entrepreneurs. Many
have designed ofrendas for other museums, galleries, and community centers. Discover how local artists and community members, inspired by this Mexican tradition, use
their ofrendas to commemorate their lost loved ones.

Now through November 6, visit the unique custom display created by the CCSEM La Casa Amiga UAW safety and training programs. The team constructed the exhibit titled “Those Who Did Not Return Home” in memory and honor of those men and women who died as a result of unsafe working conditions.

Atop the altar display is a wooden cross like the ones in makeshift memorials, which, in many cultures, mark the spot where a person died suddenly. The road
symbolizes the job site but also the way back home. The boots and helmet symbolize the workers themselves.

CLICK HERE to learn more about the CCSEM La Casa Amiga exhibit and the 13 other exhibits featured in the 2022 Day of the Dead DIA showcase.

Need a break from the #GivingTuesday emails and messages? THINK SPRING! Get ready to bid on rare Detroit Tigers Vintage Authenticated Baseball Cards and help to support CCSEM programs and services!Visit loom.ly/syFVur0 or text “ccsem” to 56651 to get started! #CCSEM #baseballcards ... See MoreSee Less

***DIAPER MATH***...On average it costs a family $70 to $80 per month for diapers per child!#walkwithmomsinneed this #GivingTuesday with a donation that will matched dollar for dollar. loom.ly/dKyEjW8#GivingTuesday #wwmin #ProjectHope #ccsem ... See MoreSee Less