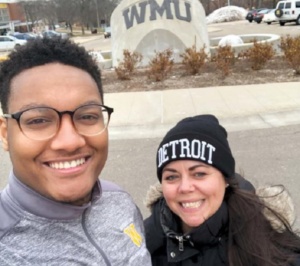 Reprinted with permission from the Michigan Catholic newspaper. Written by Dan Meloy. Originally published on Feb. 8, 2018.

Kalamazoo — Justin Black has been in the foster care system since he was 9.

He’s been with Catholic Charities of Southeast Michigan since he was 12.

He’s had more than 20 case workers. Not every worker sticks out. But the ones who do, do so because they’ve offered Black, and those in his situation, something they desperately need: stability and care.

“Of all the workers I had, Kristie (Hardin) sticks out,” Black, now 20, told The Michigan Catholic. “She had a major impact on me and she was a big part of my life. She’s more than a worker; she was a counselor, really understanding me.”

Black, a Detroit native, is a year removed from “aging out” of Catholic Charities of Southeast Michigan’s foster care program.

Black now studies at Western Michigan University after graduating from Southfield High School in 2015. During his time at Western, Black has had the chance to travel to Europe and Asia and is involved with the Seita Scholars Program, which provides him with a coach to guide him through college life.

“My goal in life is to work with people who are underprivileged, who don’t have the opportunities other people with privilege have,” Black said. “I want to expose them to the things I’ve been through and help them get out of their situations.”

Black is a testament to how foster families can have an impact on a person.

He became affiliated with Catholic Charities’ program after his case was referred to the agency by the Michigan Department of Health and Human Services.

Black moved from home to home, agency to agency most his adolescence. He was 15 and living at a friend’s house in Detroit and preparing to move to into his new foster home, his paternal aunt’s home in Southfield, when he met Hardin.

“I was around 15 or 16, a very pivotal age for me, and she (Hardin) was around for that,” said Black, who admitted he didn’t know his aunt very well at the time. “Most workers I had were very busy, and that’s understandable. But (Hardin) let it be known she really cared about me.”

Black moved out of Detroit and into his aunt’s Southfield home, where he received constant check-ins from Hardin and other workers from Catholic Charities.

Black’s transition to Western Michigan was made easier because of his new case worker, Kori Vaive, who first met Black during his freshman year.

“I remember he was skeptical about getting another worker when I first met him,” Vaive said. “Kristie had known Justin for a while, so I was nervous. I just wanted him to know that I cared about him, that he mattered to me. Even if we didn’t know each other, I wanted to do all I could to help him.”

Case workers such as Vaive have helped Black transition to college life, being available for a phone call when advice is needed or just a friendly voice to talk to.

“A lot of people like me (in the foster care system) need consistency,” Black said. “A lot of kids in my situation have had to deal with broken promises or deals. So it’s the consistency of life that foster kids need.”

While case workers can help, it’s foster parents whose primary goal should be to build that source of stability — regardless of what the child’s future might hold, Hardin said.

“Foster parents should realize when they are in this program, they should not assume they will adopt the child,” Hardin said. “This is a service centered on the child’s needs. If it’s in the best interest for the child, then they will be reunited with their birth family. Or, they might stay in foster care until they ‘age out.’”

Harden is up front with potential foster families about the realities of foster care, letting them know if they are looking to adopt, being a foster parent isn’t necessarily the route to take. Still, she stresses, foster parents can make a world of difference in a child’s life.

In an ideal world, foster children are returned to their birth families, with the foster and birth families having an amicable relationship based on what’s best for the child.

There really is no such thing as a “typical foster family,” Hardin said. Foster parents range from empty-nesters to single people to couples who can’t have children.

“It takes a special person to be able to care for a child like they are your own, knowing that there may come a time to let them go,” Hardin said. “This is where building a good relationship with the birth family helps.”

Regardless of the reason a child ends up in foster care, compassionate case workers and role models playing an active role in a young person’s life can yield positive results, as Black readily admits.

“The more I think about it, having people like Kristie or Kori in my life was huge,” Black said. “I was lucky to have people in my life who were behind me, there to support me when I really needed it.”

Black, who is majoring in public relations with a minor in journalism and a focus on ethnic relations, would like to one day tell the stories of kids who grew up in situations like his.

“I’d like people to know that when foster youth get out of a toxic environment, it changes everything,” Black said. “To get them around positive people, those positive people will work off of them. That positivity can be contagious.

“My advice for foster youth is to find your outlet,” Black continued. “Whether it’s sports, education or music, that is your way of mentally leaving the situation you are in, even if you can’t physically leave the situation. Do what it takes to surround yourself with positive people. Whether it’s a coach, a teacher, a guardian or a case worker, they can open up your world and really make a difference.”