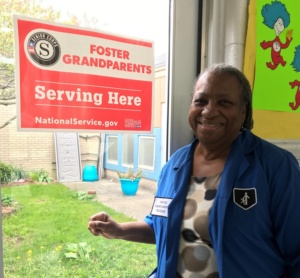 One of the first things Doris McCutcheon thought when she learned she was among the seven seniors named as 2018 Senior Volunteers of the Year by the state of Michigan was how her Governor’s Service Award will inspire others.

Doris serves as part of the Foster Grandparent program, administered in the Detroit metro area by Catholic Charities of Southeast Michigan (CCSEM). Currently she volunteers as a mentor for first graders at Herrington Elementary School in Pontiac. When asked how she feels to be recognized for her volunteer work, she said, “I was honored.” But she quickly adds: “It will give other people, especially seniors, some inspiration to know they can do it too.”

Doris has been doing works of service for her community nearly her whole life. Raised in Cleveland, Ohio, she worked at the office for her childhood church from 1965-68. Doris came to Michigan as an adult in the late 1970s with her family and settled in Pontiac, where she raised her daughter and son and became involved in the local community. She served as PTO president for her kids’ school and on the Education Committee of the Pontiac Urban League, was director of the board for the Pontiac Boys & Girls Club, and helped with several programs through her church, Refuge International Ministries.

She attributes her love for service to the example set by her parents. Her father began his retirement volunteering as an auxiliary for the police department in Cleveland, and, like Doris does today, her mother volunteered at local elementary schools. When Doris retired six years ago, she decided to continue in her parent’s footsteps. “I wanted to get involved,” she said. “I did not want to just sit at home and do nothing.”

When asked what she would tell other seniors who might be interested in volunteering for programs like Foster Grandparents, Doris said, “I would encourage them to give it a try. Because when I first started, I didn’t see the long road ahead. I just saw the day to day. And then it grew on me. It gave me something to do that was worthwhile and meaningful. When you see the look in the children’s faces, when the light comes on and they get it, it makes all the difference.”

All the adults, teens, and children Doris has helped during her lifetime have a special place in her heart, especially one young girl named Cassandra.

“She was eleven years old when we first met her,” said Doris.

“We” refers to Doris and her daughter, Monica, who Doris lost recently to a heart defect that took her daughter’s life much too young at age 43. Like Doris, Monica was a volunteer who served others. “Monica had a bigger heart than me for helping people,” said Doris, wiping a tear from her eye. She wishes she could share her recent award with her daughter. “I thought, ‘Wow, this is a nice honor, but I wish she could be here.’”

She and Doris had designed a program in the early 2000s called Santa’s Workshop for a Detroit elementary students. The purpose of the program was to give children a chance to “buy” gifts for their loved ones at Christmas time. “It didn’t mean they needed to have money,” Doris explained. “If they didn’t, it was fine. Because every child who came to the table left with something to give.”

It was there they met Cassandra. “She walked over and helped us start to clean up without even being asked,” said Doris. “My daughter and I looked at each…there was something about her. She was just different. And we decided, ‘Why don’t we kind of adopt her?’ Ever since Cassandra has been in my life.”

They met Cassandra’s mother who, after asking a lot of questions about their intentions and getting to know them both, allowed the relationship to grow. “My daughter really got involved with Cassandra and helped her with a lot of personal things she needed. We would get her about one weekend a month, and then it started escalating, and we would just get her whenever.”
Doris remembers Cassandra’s three brothers. “Every weekend we would come to pick her up, they would say, ‘Don’t you know some man that will come and get us?’ They wanted that experience too.”
Today Cassandra is a grown woman with two children. “She is an excellent mother,” said Doris with pride. Does she believe she and Monica’s influence led to this aspect of Cassandra’s life? Doris smiles when asked, but says nothing.

That humility is one of Doris’ many remarkable attributes which led Carol Wall, CCSEM Program Manager for the Foster Grandparent Program, to nominate Doris for volunteer recognition.
Doris is quick to compliment the one who nominated her. “Carol is an excellent people person,” she said. “She is very supportive, and always encouraging.”

She adds she is not only impressed with Carol, but the organization that runs the Foster Grandparents program, Catholic Charities of Southeast Michigan. Doris remembers being involved with Catholic Charities when she was working with the state of Michigan to help homeless people get their social security checks. At the time the organization was known as Catholic Social Services. “I was surprised later when I found out the Foster Grandparents was operated through Catholic Charities. The array of help they offer is just phenomenal. From helping the indigent population, to young people, to seniors. I’m just in awe of the spectrum.”

Carol stresses Catholic Charities could not do what it does without staff and volunteers like Doris.

“Her professionalism, strong work ethic, and gentile manner make her stand out,” said Carol. “Her ability to bring the students back on task is remarkable. Her ability to listen to them without judgement and haste has made the relationships among the students more cohesive and less adversarial.”

Pastor Lorenzo Turner at Doris’s church agrees with Carol about Doris, who was his Sunday School teacher in 1985, when he describes himself as a “troubled teen.” How did Doris help? “Just by being there,” Doris said. “Being a good listener.”

For those who would like to know her secret, Doris said it helps to be encouraging, rather than dwelling on the negative. “Usually when a person is not doing well, they know,” she said. “They need someone to encourage them to do better.”

“I want children to see themselves as what they want to become,” she said. “Someone told me once during my life, ‘You’re an artist!” It made all the difference for me. I really felt like an artist once I was addressed as an artist.”

This is the approach Doris takes with the children at Herrington. Using her artistic talent, she helps the children create paper figurines of the person they would like to become when they grow up. Then she continues to remind them of the image they should have for themselves.

“If one of them wants to be a police officer, as he or she is doing their school work, I ask them to think about how this will fit into their being a police officer.”
One student, while creating his figurine, told Doris, “I am making Tom Brady.” She responded, ‘No. You are making you.” 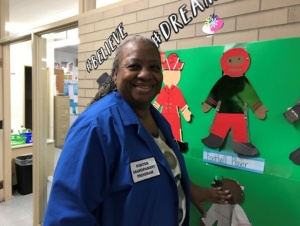 She says the approach helps them with discipline. “If they are doing some things they shouldn’t be doing, I ask, ‘Is that something a football player should be doing? How would that affect you being on the team?’”

Doris emphasized the work she does for these children gives as much to her as it gives to them.

After her daughter died, Doris had some health problems, and she was suffering physically and emotionally. “Volunteering with this program has brought me through it. It has given me a reason for being, because we all have a purpose, and we are here to fulfill that purpose. It’s given my life even more meaning.”

To learn more about CCSEM’s Foster Grandparent program, click here. To find out how to get involved, contact Carol Wall at 248-559-1147 ext. 3919 or wallc@ccsem.org.