CCSEM Behavioral Health in the News 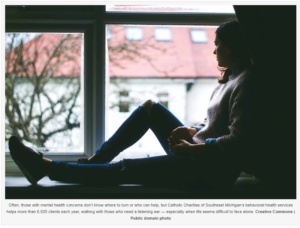 The following article was originally published in the “Michigan Catholic” newspaper on May 17, 2018.

When no one else will listen: Through Catholic Charities, Church on front lines of mental health treatment

Clinton Township — It’s a scene all too common in families across our country and city. A family member suffers silently. Moods change, and behaviors grow different. People become distant, often without warning and seemingly without reason. People act out, and no one seems to know why.

The World Health Organization estimates one in four people will be affected by mental illness at some point in life, and it’s not uncommon for leaders to decry the lack of “mental health” resources available to the public at large.

But while it’s easy to say those with mental health crises should “seek help,” what exactly “help” looks like isn’t always an easy answer.

Andrea Foley is the chief program officer for Catholic Charites of Southeast Michigan’s behavioral health counseling program. The program has seven outpatient mental health clinics in Monroe, Oakland, Macomb, Lapeer and St. Clair counties. Court systems and state service agencies often refer to the organization, which is one of the few mental health providers who accept Medicaid.
“We provide individual one-on-one sessions or group therapy, as well at marital and family therapy,” Foley told The Michigan Catholic in an interview about the state of mental health awareness in the area.

“Our clinics give preferential treatment to the poor and low-income families that have Medicaid, because with mental health treatment, Medicaid doesn’t pay as well and there are a lot of providers who don’t want to service that population,” Foley said.

Despite being imbedded in the community for such a long time, Foley said Catholic Charities staff still fights the social stigmas associated with mental health awareness that often impedes people from seeking treatment.

“There is a real stigma attached to mental illness,” Foley said. “You hear the term, ‘They’re mentally ill,’ and you think of a description of someone who has done something violent or someone who might be experiencing hallucinations or delusions. But when talking about depression, typically it’s just people experiencing a sense of isolation that they don’t recognize as an illness.”

Kirsti Reeve has been a therapist and clinical supervisor at Catholic Charities since 2009, seeing clients in Royal Oak and Waterford. She specializes in helping teens and young people who have violent thoughts or are dealing with substance-abuse issues.

Everyone time someone walks into her brightly lit office, they are taken aback by how normal it looks, Reeve said.

“There is still so much sigma about saying ‘I feel too depressed to get out of bed today,’” Reeve said. “People are afraid they are going to be labeled, they are going to be judged and even fired, even though depression and mental illness are protected by the Americans with Disabilities Act.”

Just as people who have a cold or the flu need to see a doctor, Reeve said people who feel more reclusive or unsure of themselves need to take advantage of the mental health services available to the community.

“When people come into my office for the first time, I tell them they are some of the bravest people I know for coming in,” Reeve said. “I would rather see somebody when they’ve been just struggling with feeling low and hopeless, than someone who tries to keep going and lives with depression for years.”

Before advances in medicine led to discoveries of drugs that treat psychosis and mental illness in the 1950s, the usual course of action would be to place mentally ill people into state-sponsored asylums. In 1963, President John F. Kennedy signed the Community and Mental Health Act, which called for the creation of community mental health centers to stop the institutionalization of those with mental illnesses, allowing them to get the treatment they needed within the community.

Despite this, the program never received full funding, Foley said, and when it comes to cutting government programs, mental health seems to be a favorite.

On Feb. 21, Reeve gave a presentation at Sacred Heart Major Seminary in Detroit on how parishes and pastors can play in role in fighting the mental health crisis in the community.
“Anxiety and depression are lot more common than you’d think,” Reeve said. “There is a good chance there are people you know who are struggling with mental illness. It’s not hopeless, and there are effective treatments. Catholic Charities can be one source for referral and help, but if people find another outlet, that’s wonderful.”

Reeve said an important first step can be having a friend, family member or even pastor speak to a person suffering from mental illness and ask whether they need help.

“You don’t have to be a person’s therapist to support them,” Reeve said. “Just like you don’t have to be a cancer doctor to support a friend with cancer. It’s about noticing the small things, someone who used to be really social but now every time says, ‘Oh, I’m too tired.’ Sometimes, a little probe is necessary, just saying ‘I’m worried.’ Asking with kindness is welcomed and wanted. At least you open the door.”

Just like Catholic Charities is there for people with mental health difficulties, the organization also offers support to families, friends and priests in accompanying those in need of help.

“Priests and deacons don’t have the medical and clinical training a social worker or a psychologist would have, but a parish can be an amazing resource for those who are struggling with mental illness, who very often wind up withdrawing or isolating themselves,” Reeve said. “Even if it’s just showing up and sitting in the pews on Sunday, there is a good mental health aspect in building community.”

When a person comes in for therapy for the first time, or comes back for repeat visits because they found someone who is easy to talk to and supportive in their most vulnerable moments, one can see the burdens of life ease, Foley said.

“When you look at the difference in someone who comes in the first day to when they finish their therapy, not only do they physically look better, there is this brightness in their face,” Foley said. “They are getting involved in their communities again. They’re sleeping better, they feel changed. For some, it takes a shorter amount of time. For others, it takes much longer. But if you’re experiencing depression, you’re more likely to have a depressive episode the longer you don’t seek treatment.”

Catholics are called to look after the needs of those closest to them — even when it comes to topics that are uncomfortable to address. But the fact that the Catholic Charities is the largest provider of mental health services in the state goes hand in hand with the Church’s mission: being there for others.

“This is part of our Catholic identity,” Foley said. “We are called to witness another person’s pain. We are walking with them, like on the Road to Emmaus.”

May has been observed as Mental Health Awareness Month since 1949. May 15 is the feast of St. Dymphna, patron saint of mental disorders, neurological disorders, depression and anxiety. If you or someone you love needs to talk to someone, call Catholic Charities of Southeast Michigan’s behavioral health counseling at (855) 882-2736 to schedule an appointment today.