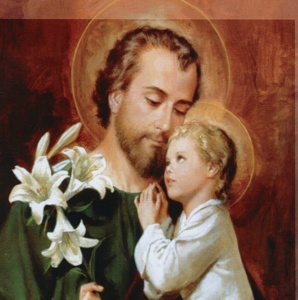 DETROIT, MI, March 19, 2018– Catholic Charities of Southeast Michigan (CCSEM), serving as the charitable arm of the Archdiocese of Detroit, has chosen a heavenly patron to support its work in the six-county region. On the saint’s own feast day, Catholic Charities announces it has adopted the foster father of Jesus Christ, Saint Joseph, to be its special patron saint.

“He is the ideal saint to represent the ministries of Catholic Charities,” said Dave Bartek, CCSEM CEO. “He was a carpenter and laborer, so he is the patron of working people. He led the Holy Family into Egypt to protect the infant Jesus from those who threatened his life, and eventually returned them to Nazareth, so he is considered the patron of both refugees and immigrants like those we serve through our Hispanic and Newcomer Outreach ministry. He is the protector of women and children – a perfect complement for our Project Hope ministry helping expectant mothers. Another important ministry is our Adoption and Foster Care program, for which Saint Joseph is the perfect role model. He is also known as a ‘Consoler of the Poor’ and ‘Solace of the Afflicted’, comparable to the people in need we serve through our All Saints Soup Kitchen and Food Pantry.”

CCSEM will honor Saint Joseph with its décor at its upcoming Annual Celebration April 28 at the Somerset Inn in Troy. Table centerpieces will feature candles with Saint Joseph’s image, and white lilies, a flower commonly pictured in the saint’s arms. Lilies symbolize the saint’s virtues of faith and purity, and his role as protector of the Holy Family.

Good Saint Joseph, just as you protected and watched over your adopted son Jesus, we ask you to watch over Catholic Charities of Southeast Michigan. May our works of mercy be an extension of your loving and compassionate arms to the vulnerable in our world today. We ask this through Christ our Lord.  Amen.

For more information about the CCSEM Annual Celebration, contact Farrah Shammas at (248) 778-6150 or shammasf@ccsem.org.

Need a break from the #GivingTuesday emails and messages? THINK SPRING! Get ready to bid on rare Detroit Tigers Vintage Authenticated Baseball Cards and help to support CCSEM programs and services!Visit loom.ly/syFVur0 or text “ccsem” to 56651 to get started! #CCSEM #baseballcards ... See MoreSee Less

***DIAPER MATH***...On average it costs a family $70 to $80 per month for diapers per child!#walkwithmomsinneed this #GivingTuesday with a donation that will matched dollar for dollar. loom.ly/dKyEjW8#GivingTuesday #wwmin #ProjectHope #ccsem ... See MoreSee Less